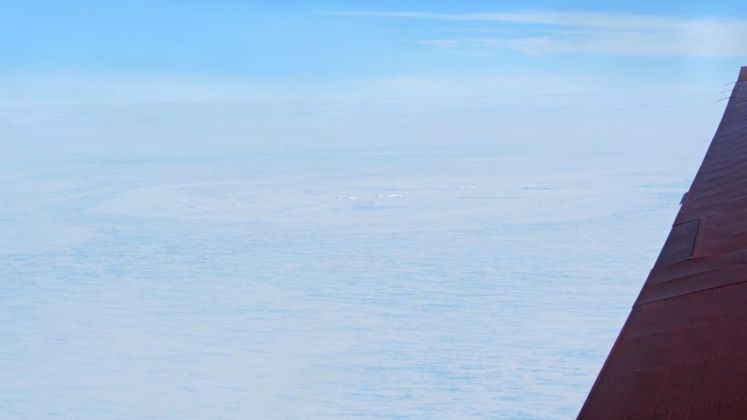 Picture: Photo of the possible meteorite impact zone taken from AWI's Polar 6 aircraft during an aerial survey - © Tobias Binder, AWI
﻿During their stay at the Princess Elisabeth station, researchers from the Alfred Wegener Institute, Helmholtz Centre for Polar and Marine Research (AWI) in Germany, have discovered a possible meteorite impact site during an aerial geological survey mission to study the geological history of Antarctica.﻿
﻿A New Discovery﻿
On December 20th, while on mission aboard AWI’s Polar 6 aircraft over the Princess Ragnhild Coast, geophysicist Christian Müller from Fielax (a company supporting the survey), looked out of the window of the aircraft and spotted an unusual formation in the ice over the King Baudoin Ice Shelf.

“About 5 or 6 kilometres away from the aircraft, I saw a massive circular structure about 2 kilometres across,” Dr Müller explained. “I wondered what could have created such a large feature in the ice.”

After returning to the Princess Elisabeth station, which AWI is using as a base of operations for the Polar 6’s survey flights this season, Dr Müller decided to have a look into the scientific literature. He wanted to know if there might be a record of some kind of impact event that happened in the vicinity of the King Baudoin Ice Shelf in recent years.
﻿Digging Deeper﻿
﻿After a bit of research, he found two separate studies to support the idea that the circular scar in the ice shelf could have been created by a falling meteor.

A study done by American and Canadian researchers using infrasound recordings (recordings of sound below the range of human hearing) from several sources, including Germany’s Neumayer Station III, concluded that a large body likely fell to Earth in the vicinity of the King Baudoin Ice Shelf in East Antarctica in 2004. In a separate study, scientists at Australia’s Davis station observed a dust trail high up in the atmosphere consistent with a trail left by a falling meteor. The Australians estimated that the falling object would have touched down in the area of the ice shelf.

“There are two lines of inquiry that support the hypothesis of an impact event,” affirmed Graeme Eagles, geophysicist and leader of AWI’s geophysical survey team based at the Princess Elisabeth station this season. “If the structure is indeed the result of the 2004 impact, we would expect it to have undergone about 10 years of alteration by processes such as snow accumulation, erosion by the wind, and deformation by the flow of the ice shelf itself.”

Six days after its initial discovery, AWI scientists conducted a more detailed aerial survey of the circular feature in the ice shelf, taking photos and videos, and collecting laser altimeter and radar data mapping the feature’s contours in detail.﻿
﻿Further Investigation Needed﻿
﻿While current evidence points to a possible meteorite impact site, the AWI team is cautious to say for certain whether the 2 kilometre-wide circular scar in the ice shelf was indeed caused by a large meteorite. AWI’s experts in Bremerhaven need to process the data the team in Antarctica has collected, and further investigation is needed.

And as the AWI team in Antarctica was sent there to conduct a geophysical survey of Antarctica’s bedrock to investigate the continent’s geological history, and not a meteorite impact site, they don’t have the means to conduct any thorough, in-situ investigation at the moment.

“If we could generate a plausible argument that this might have been the site of an impact, then we’d like to return to the site to do in-situ work,” Dr Eagles explained. “We’d certainly bring in more people to widen the range of expertise.”

More research at the site might include drilling into ice shelf to see if there is further evidence of a meteorite impact event. However it will have to wait. “We have to finish the survey we came out here to do,” Dr Eagles said. “This circular structure will have to go on the back burner until then.”

A Serendipitous Find During an Airborne Geophysical Survey

What are the research objectives of you and your colleagues from the Alfred Wegener Institute conducting this season? I understand you've got an ice radar, a gravimeter, and GPS antennae.

﻿We're conducting a survey. We're trying to map this part of Antarctica in detail to see what kind of rock is here. But because Antarctica is covered in ice, it makes it difficult to do traditional hammer-swinging geology to study rock formations. So we need to resort to other techniques: remote sensing techniques, which include using an ice radar, a gravimeter, and a magnetometer to help us interpret what kinds of rock lie beneath the ice.

We're using an aircraft called Polar 6 to fly our missions. It's a Basler BT-67, which in essence is a Second World War Douglas DC-3 with a few modifications so it can support the instruments we're using. It's ideal for covering large areas in a short period of time, and rugged enough to land on bumpy ice runways.

What purpose does each instrument serve?

What exactly about the geological history in this part of Antarctica are you interested in knowing?

﻿The research we’re doing is part of the WEGAS and GEA projects, which stand for West and East Gondwana Amalgamation and Separation and Geodynamic Evolution of East Antarctica, respectively. We're trying to learn how the Gondwana Supercontinent - which Antarctica was a part of - was formed starting some 550 million years ago and how it later broke up from about 180 million years ago.

In a nutshell, what we're doing is paleogeography.

During one of your aerial surveys over the King Baudouin Ice Shelf, one of the scientific flight crew spotted an unusual feature in the ice. What did he see?

Did he find any evidence to support his hypothesis?

﻿Sure enough, Christian found a scientific paper from 2007 in which American and Canadian colleagues had used infrasound measurements from around the world to triangulate the approximate position of an object that made a big bang in the atmosphere in 2004. The position was very close to where he'd noticed this very large circular structure in the ice. The study supports the idea of a meteorite impact on the King Baudoin Ice Shelf 10 years ago.

Also, some of our Australian colleagues at Davis station – which is quite a long distance around the coast – observed a dust trail at a height of about 30 km in the atmosphere around the time of the proposed impact in 2004. Using this dust trail, they estimated that the object that left the dust - had it been a meteor - would have landed somewhere in the vicinity of the circular structure we found. So there are two lines on inquiry that support the hypothesis of an impact event.

If the structure is indeed the result of an impact, we would expect it to have undergone about 10 years of alteration by processes such as snow accumulation, erosion by the wind, and deformation by the flow of the ice shelf itself.

Do you plan to return to the potential impact site to investigate further?

What will be done with the data you've collected?

﻿We've collected the laser altimeter data that will show us what the top structure of this surface looks like. Whether it's a crater with raised rims, or a central peak, or whether it's something else entirely, we don't know that yet. Our colleagues back at AWI in Bremerhaven will need to process these data in more detail than we've been able to do so far to know more. Those of us here don’t have the right expertise to thoroughly analyze them.﻿

So at this point, you can't definitively say that it was a meteorite that created this hole in the ice?

﻿No, we can't say that with any confidence at all at this point. We can say we've found something very unusual – so unusual that it warrants further investigation. However there are two very promising prior results – the infrasound data and the observed dust trail in 2004 – which support the hypothesis that this structure could have been created by a meteorite impact, and certainly support the decision to collect more data for further analysis and investigation.﻿

What kind of object creates a 2 km-wide circular structure in an ice shelf? It wouldn’t have been 2 km across I imagine.

Besides further analyzing the data you've already collected from the Polar 6 aircraft, do you think there might one day be plans to do a more thorough study of the possible impact area? Perhaps using an autonomous underwater vehicle to look at the seabed in the vicinity of the hole in the ice shelf?

﻿We're not yet at the stage where we can think in any great detail about how to go about investigating this circular structure any further. Autonomous underwater vehicles have a limited range, which might limit their ability to reach the area beneath the circular structure, and limited capabilities for to search for a grounded meteorite.

Another option might be to drill down into the ice in and around the crater and see what information we can find that way. What we might expect to see in that case is, if this object did break up before hitting the ice shelf, that perhaps some of the pieces were not travelling with enough energy to penetrate the ice shelf, and may have settled on or within it. We may find evidence of a dust layer in the ice surrounding the crater beneath 10 years of snow accumulation.  I think that would be worth having a look at.

If we were able to generate a plausible argument that this might have been the site of an impact, then we'd like to return to the site to do in-situ work rather than more remote sensing aerial surveys. We'd certainly bring in people to widen the range of expertise.

But first things first. We have to finish the survey we came out here to do. This circular structure find will have to go on the back burner until then.﻿

Have scientists discovered a new meteorite impact site in Antarctica? from International Polar Foundation on Vimeo.